Whilst we are constantly looking to the future, new collections, the next sales trip, new cloth developments; we also appreciate our unique position in the continuum of British textile industrial achievement, represented by the span of time that we have been manufacturing in the same location for over 150 years. Arguably there were bigger factories, more recognised names in the past; however the fact that we have maintained continuity of textile weaving on the same site from the boom time of the industrial revolution to the present day; spearheading the future of textiles in Bradford is to be celebrated. As part of the celebration of our unique place in contemporary British textiles we are proud to announce the recent unveiling of a blue textile heritage plaque to our founder William Halstead. 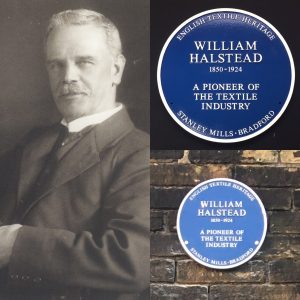 As a tribute to William Halstead and his entrepreneurship during a time of unprecedented opportunity in Bradford when those with bravery and vision could make huge leaps in upward mobility, we reproduce here a eulogy at the time of his death.

“Bradford has lost a citizen who has played a prominent part in the spheres of industry and public life by the death of Wm Halstead, Head of the firm of Wm. Halstead and Co. Worsted cloth Manufacturers, Stanley Mills, Dudley Hill, who died on Monday aged 74. He had a romantic career, from a humble beginning building up a prosperous business. A native of Bradford, Mr Halstead’s father Mr John Halstead, a native of Brierfield, went with his parents during a bad time in the Cotton Trade to Manningham in 1830 and married the daughter of Samuel Brea, (known as Sammy Brear) who used to sell butter at the old Butter Cross in Godwin Street. Mr Wm H could recall the time when he rode on his grandfather’s butter cart.

After a brief school career, William started work as an errand boy and one of his duties was to keep stray cows out of the shop in Kirkgate. In the evenings he attended the Mechanics Institute classes at Bradford. Afterwards, he went as apiecer and after a period with his uncles as wool manufacturers and spinners, he began business on his own account at 21 yrs. of age as a Commission Weaver. In 1877 he went into the trade and by dint of steady industry and commercial acumen the firm which he founded, Wm Halstead and Co. was securely established, their own shed at Stanley Mills was built in 1890 and the works have become one of the most important in the neighbourhood”

Returning to the present day, William Halstead is the British name for worsted fabrics and known universally as the ‘Master of Mohair’ amongst the leading edge fashion houses of the world, international high-class tailors and cloth merchants. It is not an accident that William Halstead has forged a special place in the hearts of the worlds clothing and garment specialists. We feel fortunate to have the solid foundations laid down by William Halstead on which to build. The future is bright for the continuation of textile manufacturing and cloth innovation on the original site with a constant program of product development, material research and investment in new technology and the latest production machinery. William Halstead continues to attract the brightest and best experts from the local pool of talent; fully occupied in our warping, weaving and mending departments. The last decade has seen the assembling of Yorkshire’s finest group of textile professionals under the roof of Stanley Mills, acquired by William Halstead in 1877. We have grown to a global reach that finds our experienced sales team regularly visiting the major capitals of the world and presenting our fabrics at major international sales shows including Milano Unica and Premiere Vision.

The original William Halstead would surely be very pleased to see the business established under his name in the 19th century continuing to be successful and relevant in the 21st century.